It is not very long. Its gentle arch spans the deep cut of the Tongue River below. Its supports are constructed of rust colored iron, its deck of thick, weathered wood slats that have a slight spring in them as you walk across. This simple foot bridge has been a regular part of my morning routine as I make my way from home to my office.

In many ways, the bridge not only spans the river, but for me it has spanned the seasons. In the fall, the river below was thin and shallow. From the vantage point of the bridge, it looked like no more than a narrow creek. As winter set in, the view from the bridge changed. The water below was quickly covered with a coat of ice and snow. Snow hung on the barren tree branches that hung over the bridge. More than once I was showered with snow as I knocked against a branch. As the winter progressed an array of animal tracks appeared in the snow that covered the water. It was also evident that some animals found the bridge a handy way to get across the deep ravine. The tracks would lead up to the bridge deck, disappear, and then appear again on the other side.

The real beauty of the foot bridge has emerged in the Spring and early summer. As the snows of winter melted, the creek below became a rushing river again. The waters climbed high on the sides of the ravine. I would often pause at the middle of the bridge to gaze down at the scene below. As spring transitioned into summer, the trees began to leaf out. All winter, the foot bridge was basically open to the sky. Now a canopy of green has formed over the bridge, shielding it from the increasingly hot sun. As the temperature has climbed, the short span of the bridge has become a cool oasis on my daily walks to work.

Our faith in Jesus is like the foot bridge. Because of what Jesus did for us on the cross, He has created a bridge between spiritual death and spiritual life. As Jesus said in John 5:24, “I tell you the truth, whoever hears my word and believes him who sent me has eternal life and will not be condemned; he has crossed over from death to life.”

Just as there is but one bridge over the ravine on my path to work, so there is but one bridge from earth to heaven. That bridge is Jesus Christ. In John 14, Jesus promised the disciples that He was going to prepare a place for them in His Father’s house. Thomas questioned Jesus about how they were going to get to that place. Jesus answered, “I am the way and the truth and the life. No one comes to the Father except through me.” (John 14:6)

But this spiritual bridge, which leads us to heaven, has a profound impact on our life today. Every time I walk across the foot bridge, I get a different perspective on the scene below. In a similar way, as we walk across our spiritual bridge, it gives us a different perspective on life. As the seasons of our life change, our vantage point from the bridge reveals new insights and new truths. Our eyes are opened to things that we would miss otherwise. Our bridge keeps us from being swept along by the torrent of worldly values and changing morality.

I enjoy crossing the foot bridge every day. It is like stepping into the woods and for a brief moment being transported into another world. It is a vivid contrast to the paced streets and square lawns. But much more, I revel in the reality that I have stepped onto the bridge of faith that leads to eternal life. 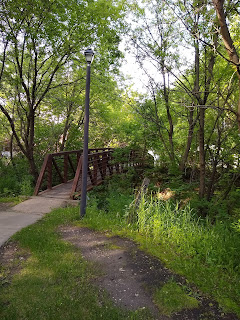 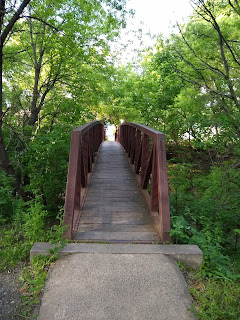